In honor of Shell’s “Let’s go” ad campaign, let’s play “What 10 things do you see wrong in this picture?” Ready? Let’s go. 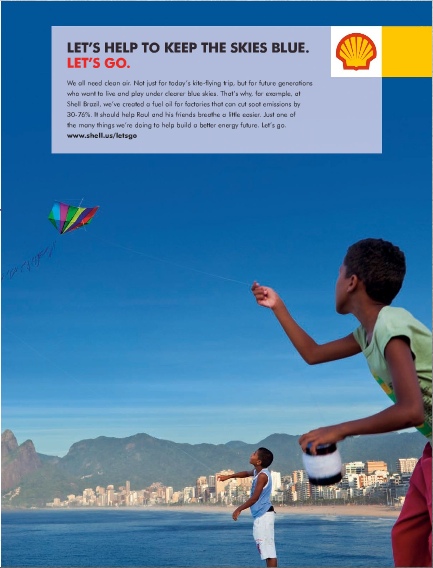 1.  The kids look Photoshopped in against a photograph of a Brazil coastline.

2.  That roll of kite string looks like it could be Photoshopped in too. It’s HUGE! And look at the way he’s holding it.

3.  The second kid has his own kite string but no roll of string. (Sorry, you probably can’t see the string, but it’s there and it heads off the page.)

4.  There’s no “to” needed in the headline. Why not say “Let’s help keep the skies blue”? C’mon, who was the copywriter on that?

6.  “Let’s go” seems to be a lame rip off of “Let’s roll.” The latter phrase helped galvanize our nation after the September 11 attacks. Shell’s tagline sits weirdly near the ad headline, not making sense, and then ends the paragraph like it’s trying to galvanize an industry—a spoiled, very rich industry.

7.  “Let’s help to keep the skies blue”—why? Because you can’t keep the water blue?

8.  Shell is talking about its supposed success minimizing pollution, but the picture looks like a filthy haze is still settled over the coast.

9.  Why Brazil? I don’t think Brazilians want to hear “let’s go” from Shell. (Here’s why.) Is this a lame attempt to change their minds? Trying to influence a court decision on Shell’s role in pollution-related health problems?

10.  The website given is www.shell.us/letsgo, obviously their United States site, so again, why mention Brazil? It only makes people like me look it up and find bad news about you.

On an added note, I might know why Shell chose Brazil. It was to distract our attention from their appalling (but exonerated) actions in Nigeria. Or from their questionable environmental and/or advertising practices in Canada, New Zealand (case dismissed), and the Netherlands, Belgium and the United Kingdom.

Maybe their ads should say, “Let’s help to keep the Shell ads true.”

Like to read about marketing and advertising with a sometimes social spin? Check out MultiCultClassics and Business Week’s Brand New Day.